What a year! It's hard to think back and realise what a downer we were on last Christmas with the house and everything stalling as it always seemed to. I'd like to say I've completely forgotten that feeling, but I think it's still at the back of my mind...

Our bright spot was our visit to Canada to spend with Martin's brother Lloyd and family, Yvonne, Laura, Amy and Rich.

Anyway, this year we're happily ensconced at HiG's enjoying the festivities. Presents have been opened and I'm enjoying my annual box of Ferrero Rocher. So there's nothing left to do but to wish all our family and friends (both new and old) a Merry Christmas. If you're still out there travelling I hope you have found some new friends to share the day with.

Our latest galleries from Bulgaria and Romania are now up.
Posted by Martin at 10:25 am

We had planned to fly back to England last Thursday but various men (and one woman) in hats changed all that. We bought train tickets from Brasov in Romania to Warsaw in Poland and I explained that we had our bikes. The lady at the counter said we'd need to see the conductor but it shouldn't be a problem. It sounded like the same deal as Istanbul - Plovdiv and Sofia - Bucharest so we weren't that concerned.

In fact the journey started out that way too. The first conductor needed 'tipping' to allow us to put the bikes in a spare compartment and all was going well until we reached the Hungarian border. At this point she left the train and a new set of conductors got on. We decided to play dumb and claim the last conductor had said we'd be fine all the way through to Warsaw but he was having none of it. He demanded 20 Euros per bike which would get us as far as the border. Our choice was pay up or get off. It suddenly became clear that we were going to face this situation not only in Hungary but Slovakia, Czech Republic and finally Poland. Forty Euros a time would mean the bikes would cost double what we had and it was mouch more thatn we could afford. Especially when we knew the money was going straight into some bent conductors pocket.

In the end I used my acting skills to persuade him we only had a small amount (less than 5) of euros and a couple of dollar bills which he took as the 'fee' for the bikes to Budapest. We decided to hop off there, find out where we could get a slow train and continue our journey later that evening or the next day. At the station we got our tickets ammended and were told to have a chat to the conductor. Like fools we assumed this would be a better situation.

Margit met us at the station and asked us if we needed accommodation. As it happened we did and she showed us to an apartment she lets out and was generally very nice to us. I nipped out to get us some grub (we hadn't eaten all day) and ended a somewhat fraught day by not being able to recognise our lobby door among the many similar ones on our street. I increasingly frantically tried the key in any number with no joy. In fact, I was about to throw a small stone at a like looking lit window when I remembered a travel agents we'd walked past was 50m further up the street. Two minutes later all was well but it was hardly the perfect way to end the day.

Our train was not until 11:50 and we got up feeling as if we'd made the right decision: a night in a bed always being preferable to one on a train. When the train arrived I headed off to use my charm on the conductor to see if I could get the bikes safely chained up in a quiet bit of carriage near the engine. They'd be in out of the way and it seemed to be an amicable solution. In fact, the only solution acceptable was to give the conductor 40 euros. This would get us to Slovakia where naturally the same game would start again. It was, in every way, too much. If we can't take bike on the train then why weren't we told when we bought the tickets? If you can - as bunging the conductor proves - then why can't you do it in some legitimate way? I was pretty angry at this point and ready to fight anyone in a peaked cap, ready in fact to do what I could to bring the Hungarian state to its knees. In the end we decided the only thing we could do was to get in touch with our old mate Stelios at easyJet and get him to get us the hell out of there.

So while I munched my fish paste pasty (don't ask) Vic went webbing and got our tickets changed. At 5:30pm we were in the air and at 7ish we were calling Wardy from the airport to ask for a room. Thankfully, his floor was available and we spent a couple of relaxing days there with TV we could understand and food options which didn't involving miming and pointing.

While in the Harrow area I nipped back to see the old flat and was dismayed to see our nice hardwood door had been replaced with a white uPVC one with those flat, brass-coloured, parallelogram-shaped numbers stuck to the window. "48" was on one pane, "A" on the other. Another highlight was the Harrow Tesco. (Not a sentence you'd ever expect to read...) While in the checkout queue I was asked to pass the 'Next Customer' bar by the old bloke behind me. As I did he unloaded his trolley and asked me to "guess how much this kettle cost". I told him I had no idea. "£5.27", he replied, "but I don't know how good it'll be so I bought two."

We stuck to our original plan of getting the Thursday train to Darlington and that's where we are now. Hig seemed quite pleased with his present of a sheesha but, to be honest, a bit less thrilled by the stinking cold we gave him as well. Some people, eh?
Posted by Martin at 6:51 pm

Our arrival in Sophia was relatively painless and we made our way through the streets to our Hostel (the fantastic Hostel Mostel). And we're still here.... all that is about to change though as we're getting our act together and will be getting the sleeper train to Bucharest tonight.

We do have an excuse for our delay in getting to Romania though. The Romanian Embassy here in Sophia take 5 working days to process your visa. It was annoying though when I got to the Embassy today and handed over my passport and $40US ($40US for a piece of paper!) and they then went through a pile of papers on the desk, grabbed my application which had no changes and then stuck the piece of paper in my passport. 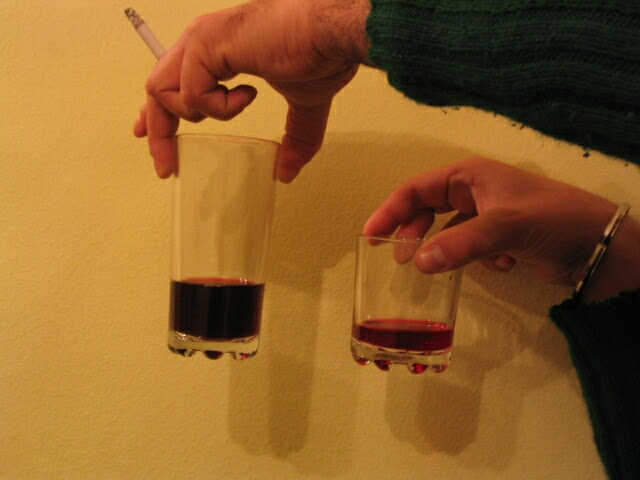 Frustrating, but it has given us an opportunity to relax here and meet some fellow travellers as well as sampling the local beverages. Imported "brand" drinks cost about 6 times the cost of the local brew so we've tried the local rum (with the fantastic name of "Pom"), the local beers and of course the wine. Most of the wine was quite drinkable but when Banz and a couple of fellow travellers went for a late night run they bought back one bottle which cost a total of 0.95 lev (approx 34 of your English pence or 84 Aussie Cents). Unfortunately this wine had the colour and bouquet of red cordial with none of the sugary taste or post-drink hyperactivity. We stuck to the expensive 3 or 4 lev bottles after that!

So our three or so weeks in Bulgaria will finish tonight. We had originally planned to spend about a month in Romania after enjoying it so much on our first trip there back in 1998 (also our first trip together - ahhh!), but time is against us, so it will just be 3 or 4 days before heading up to Warsaw to meet up with Beatre, Gerry, Kuba and Victor and getting our flight back to the UK next Thursday, December 9th.

We've enjoyed our time here in Bulgaria and will definitely come back as there's a lot more here than we realised.

We still haven't got to grips with the yes/no headshaking thing, but we proudly translated a Bulgarian calendar with cyrillic into its Italian food equivalents the other night.
Posted by Victoria at 8:49 pm
Fame and its trappings

After writing the blog below earlier today I thought I'd have a general surf of the web. I saw a link for this site - The Hungry Cyclist which has been set up by Tom who is doing a tour starting in Toronto and going across Canada and then down through South America by bike. Tom's obsession is all about food (a man after our own hearts) and when I saw that he was going to Cuba I thought I'd pass on some info about the gastronomic delights of Cuba (well, I let him know that it was a bit hit or miss, but you could get lucky!).

After sending off the mail I kept exploring his site and imagine my surprise when I found that we were in his Links section. To quote -

The Big Trip - Full of whacky facts about the two riders and what they are up to this site is great fun!

We promise we won't let it go to our heads.
Posted by Victoria at 8:49 pm
Newer Posts Older Posts Home
Subscribe to: Posts (Atom)