After weeks of being told that it was going to snow here in London, it finally dumped it down in about 30 minutes last night.

Thankfully we were just about to go into Tesco just around the corner from our house and with everyone fleeing, we were able to have pretty much the entire supermarket to ourselves (yet it still strangely took 20 minutes to get served for a Lottery Ticket - some things never change).

Traffic was already queueing up on the roads and we were thankful for the short walk home. A quick snowball fight for the benefit of our neighbour's video camera (try as we might we couldn't get her 18 month old son involved) and we were safely ensconced in the house with the central heating blasting out.

Last year, London received about two inches on the 30th January - so it seems to be becoming an annual event. Maybe it could be a tourist attraction a la changing of the guards? You read it here first.

As mentioned last Tuesday we went off to Highbury last night to see the underdogs Arsenal take on the league leaders Boro (for reality's sake please reverse the two adjectives describing the teams) for a place in the Coca-Carling Cup Final. We went with heavy hearts after the battering the lads received a couple of weeks ago at the hands of Arsenal.

We had just got through the gates as kick-off happened and took our places (nobody was seated) in the packed Boro end. What ensued was a fantastic game. The Boro end continually outsung Arsenal (do their fans not sing at all?) and our players responded magnificently. Although there was a lot of Arsenal pressure early on, they never looked like really finishing off their overly-tricky play and after several good chances (especially Juninho's shot bouncing off the post), we rightfully went ahead with a Juninho goal. They again applied pressure but were unable to break through our defence and we were unlucky when a couple of shots went wide. The game finished 1-0 to the good guys for once.

Our long journey home was improved by seeing lots of glum Arsenal supporters on the train who were occasionally broken by ecstatic looking Boro fans grinning back at us.

Fingers crossed Arsenal will stick to their youth mixed with crap older players policy and we'll stick a couple of goals past them at the Riverside and make the final at Cardiff. Bring on Bolton or Villa.

Note for international users - Boro never beat Arsenal. Ever. Well except for once in 2001, but apart from that never. Boro have never won an important cup in their history (going back over 100 years) and this could be our best chance yet. COME ON BORO!

On Saturday we had an trip out Olympia for the Adventure Travel and Sports show. It was a good opportunity to test my strength by carrying a million brochures but, more importantly, we got to do a bit of author stalking.

As well as the usual stands from businesses there were a number of lectures over the 3 days of the exhibition. The first talk we attented was by Tom Fremantle, author of "Johnny Ginger's Last Ride" and "The Moonshine Mule". Tom's talk and slideshow detailed his 2,700 mile walk from Mexico to NYC in the company of a spirited mule called Browny. The pair were following in the footsteps of one of Tom's ancestors who made the trip during the American Civil war and the talk gave lots of interesting background to this conflict and the impact it had (and continues to have) on people, especially those in the South. If you get the chance to have a look at either book then they're highly recommended.

The second lecture was also by someone who had cycled from England to Australia (it's a wonder long-haul flights are so crowded with the number of people making trips like this!), Richard McLaughlin. Richard and his brother had taken an extra step and attempted to make the journey using only human power. This meant they had to sea kayak across the English Channel and down through Indonesia although, in the end they were forced to take a boat for the last sea leg due to cyclone warnings. (Incidently, boat was destroyed after running aground in heavy weather a few hundred yards from the Oz coast.) Again, Richard was a highly entertaining talker even if at times he was drowned out by the Mongolian lecture and music from the room next door.

Overall the show was a success although we would have liked to have seen more clothing and equipment exhibitors. 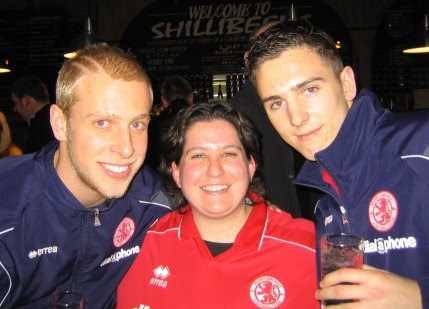 Last Saturday the mighty Boro played some team you may have heard of called Arsenal. Plucky Arsenal came through and beat us 4-1. Fortunately despite our attempts to get tickets to the game, all away tickets were sold out. Unfortunately, we're playing them three more times before the month is out (twice in the Carling Cup semi-final and once in the FA Cup). We'll be subjecting ourselves to next Tuesday's (20th January) game at Highbury.

The one bright spot that we were able to take out of last Saturday was the MSS Supporters South Ball. This is an annual event which we've attended over the last three years. This year one of the highlights for me was meeting two of the young players that the Boro have coming through, Andrew Davies (left) and Stewart Downing (right).

I probably won't be getting a start for the Boro for another couple of years, but with the way our strikers are playing, I might get a go up front this season.

Happy 2004 one and all - here's hoping it's a good one for everyone out there.

My brother Lloyd and I had a New Year bonus yesterday as he managed to get us both spots in a 'scramble' event a nearby golf course. (A scramble is where the golfers are split into teams and everyone hits a drive. You then choose the best one and everyone hits from there, and so on.) We were both on the same team of 4 and we played some good golf despite the chily conditions. It was strange to play a course with frozen water hazards although it worked to our advatage on one hole when our skipper's approach landed in the middle of the lake, bounced 50 feet in the air and plopped on the green next to the flag.

Our team worked well with everyone contributing, most notably Lloyd's 7-iron to the 9th which earned us a birdie and a small reward. In the end we finished at 7 under par with the winners at 10. We were pretty happy with the score but were kicking ourselves a bit as we missed a number of sub-10 foot putts which would've put us in the money.

However the most costly mistake of the day has to be the lady who got a hole-in-one and stood a round for the entire field of 34 4-balls. Hope she had insurance!
Posted by Martin at 10:39 pm
Newer Posts Older Posts Home
Subscribe to: Posts (Atom)