Mega Update for the Galleries

Today had its ups and downs. We said goodbye to Hig (downer) but were able to do a mega update and clear all the photos off the digital camera (upper).

For your viewing pleasure the following galleries are now available -

As always use the forward and back buttons down the bottom of each gallery to navigate. Watch this space as the Lake Baikal and first Mongolian galleries are imminent.
Posted by Victoria at 9:29 pm

A short note on cold weather

As expected, we have experienced some cold weather since arriving in Eastern Europe and Eurasia in February and March but I think the biggest shock has been discovering that Darlington station isn't actually the coldest place on earth. Our top three moments of chilliness on the Big Trip have been... 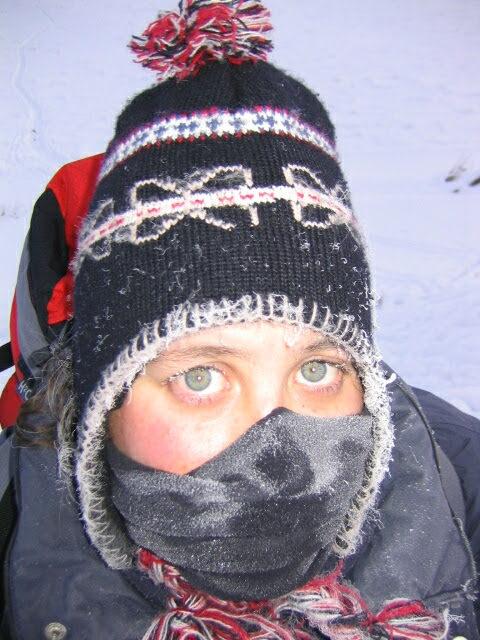 3) The shock of snow in Bulgaria after months of following the sun through France, Italy, Greece, Egypt & Jordan, and the pleasant temperatures in Istanbul. We learned here the truth about 'no bad weather, only inappropriate clothes'.

2) Leaving the dacha with the thermometer touching -21c. There was no wind so we were surprised to find our covered up bits stayed quite warm. At this temperature our eyes watered and the tears froze on our eyelashes. Frost formed on the beards of those who had them and the hats of all. Hands could operate cameras outside of the gloves for about 30 seconds before becoming painful and a bit useless.

1) Our second day at Lake Baikal saw temperatures at a manageable -18c but strong winds which dragged it down to -30c or more. My tear ducts iced up and I was shivering uncontrollably despite wearing a woolly hat, scarf, Buff over my lower face, sunglasses, thinsulate glove liners, sheepskin gloves, thermal top, long sleeve t-shirt, fleece, thick coat, thermal trousers, trousers, two pairs of socks and hiking shoes. The camera had to be kept inside my gloves for it to even work and my hands were numb and throbbed with pain in the time it took me to change the battery.
Posted by Martin at 6:42 pm
Mongol Empires 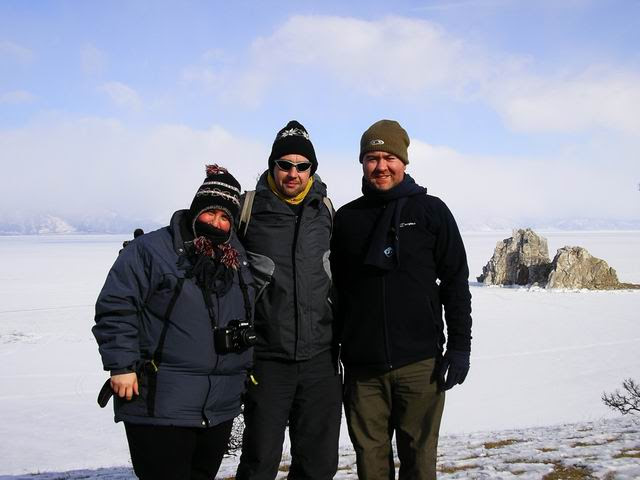 We last left you as we were heading for Lake Baikal, the deepest lake in the world. I wish I could think of the words to describe this place. All I can say is that it is probably one of the most beautiful and magical places that I've seen in my life.

We spent 4 days and 3 nights there on a tour with Jack Sheremetoff from Baikaler tours. Our nights were spent in a homestay on the island of Olkhon (the largest island on the lake) eating the best food we ate in our entire time in Russia. During the days Jack would take us for walks on the lake as well as a memorable day driving across the ice to see some ice caves and sacred sites (the area is understandably very important to the indigenous Buryiat people) and lunching on the local salmon (omul) which was absolutely delicious. We've got literally hundreds of photos and as soon as we can get a fast internet connection we'll have them up for you to see - though I'm not sure they'll do it justice.

Since then we've had a day trip to Ulan Ude. We arrived at 6:30am, napped for a couple of hours, went off to the Datsan (Buddhist Monastery), returned to Ulan Ude and saw the world's biggest Lenin head (really!) before testing our Russian for the last time at the hotel restaurant and retiring relatively early.

The next morning we were again on the train, this time departing at 6:30am and travelling to the Russia-Mongolia border. The train stopped at the border and after about an hour of waiting (and being reassured by a Danish girl who had talked to the providnitsa that the train would be there for 4 hours), Banz and I went in search of some food at a local market as the restaurant carriage on the train had closed. Whilst at the market buying very random items to spend the last of our roubles (noodles, strange kind of marshmallows and the largest bag of biscuits you've ever seen), we began to be alarmed by the fact that we could here train whistles. As we quickly paid for our goods (which had been added up on an abacus) and returned to the station, we saw to our dismay an empty platform where our train once had stood. We immediately panicked and started running up the tracks (me having to pick my way through the ice as I still slip over at the slightest patch). The train was there being shunted about and locomotives and carriages being added and subtracted. We met a worker halfway there and started shouting "ULAN BATOR!! ULAN BATOR!!" at him and he calmly told us to wait there and the train would be coming back to this very spot. The train was true to his words and as it pulled up, we ran and found our carriage, Banz opened the door (without waiting for the stairs to be lowered) and threw his three packets of chicken noodles and then himself on. I waited for the provodnitsa to lower the stairs and then hauled myself and biscuits on. We then found Hig who had been doing his own panicking (his was more for the fact that he would've had to carry our backpacks as well as his own if we didn't make the train). After we sat down, made ourselves a cup of tea and tried to relax we began getting visits from the other foreigners on board who had been alerted by Hig to our absence. We had become carriage celebrities!

The train then finished shunting and returned to the exact same spot on the platform where we had left it for our sojourn to the market. And stayed there for five hours. Yes, five hours - the majority of which we spent playing cards and incorrectly filling out Russian customs declarations.

We then travelled through no man's land to the Mongolian border and filled out four forms (2 customs, 1 entry and 1 health clearance) before actually continuing the journey to Ulan Bator where we are now. Ulan Bator seems quite relaxed and we've been excited by simple things like English in a menu, BBC World Service being on FM and clear instead of SW and crackly and the ABC (Australian Broadcasting Corporation) having a channel on our TV in our room. Makes a nice change from attempting to follow Beverly Hills 90210 in Russian.
Posted by Victoria at 5:00 pm

A delightful weekend in the country

Much has happened since our last blog starting with our trip to a Russian dacha near Staritsa, a small town between St Petersberg and Moscow. This excursion promised snowy horseriding and simple living but delivered something much different...

We had arranged to be picked up at Tver station when our train arrived at 4:30am but half an hour's standing around in -18c temperatures gave us an indication something had gone awry. A few quick phone calls later (10 roubles of change doesn't go as far as you may think) and we knew that Pasha's car had failed to start and we had to make our own way there. A taxi driver was soon woken up and a price arranged. What our cabbie lacked in local knowledge he made up for in persistance. After multiple wrong turns and tracks that petered into nothing we arrived at the rendez-vous point and were met by Pasha and his horse drawn sleigh.

Pasha could be described as a somewaht cynical, world-weary man of few words. We soon came to think of him as a miserable sod. His place was very basic and featured a couple of heated rooms (the second warmed after we confounded his expectations by being able to light the wood burning stove (those Nibthwaite bonfires taught me much)), an outside loo 30 metres from the house (temperatures were routinely -20), a shower which looked like a deathtrap and a kitchen which would have shamed the Clampett family. Brave faces were applied but we all felt that our original estimate of 4 days here would be more than enough.

Hig and I were lucky enough to accompany Pasha into town after the car was tractor tow-started. Our host didn't open up much and exchanges like...

...didn't really offer much encouragement. Our trip to town was primarily aimed at stocking up on food supplies for our time there (four days immediately cut to three on viewing the house, subsequntly cut to two after an afternoon with Pasha.) Letting him know we were going a couple of days early had a detrimental effect on suppliles, something we only found out about back at the 20-kilometres-from-town homestead when it turned out Pasha had 'run out of Roubles'. We had two days of eating pasta and tomato sauce and fried bread and tomato mush to look forward to. (Recipes for tomato mush available on request.) The live chicken in the basket was eyed up more than once. (Hig had seen a way to hypnotise a chicken on Tv but couldn't remember what it was. As a result we missed the chance to see a hen eating an onion thinking it was an apple.)

That's not to say we didn't enjoy ourselves. The scenery was breathtaking, Pasha's neighbour Kolya was a character and feeding logs into the fire never grew dull. The three of us also had a good laugh at the situation in a 'gallows humour' kind of way. The night before we left Vic tried to get Pasha to arrange a taxi which he was at first reluctant to do. He simply gave Vic the phone and a few cab numbers and let her get on with - pretty typical of the man. Eventually after a wall of Russian was clearly between us and a lift out he stepped in and arranged the pick up, not 100 metres from his house but over a kilometer away over the frozen Volga. The next day we set off with full packs in -21c temperatures like Scott, Oates and, er, Smith of the Antarctic and tramped through the snowy wastes. Despite ice forming on our eyelashes and stubbly chins we weren't that cold and the walk in the dawn light rates as one of the high spots of the trip.

From there, to Moscow and an amazing few days wandering around seeing Red Square, St Basil's Cathedral, the Kremlin, Lenin's Mausoleum (closed), the massive GUM shopping centre and the even bigger Hotel Russya. We had a fun afternoon looking round a market and bought some souvenirs but turned our nose up at the stamp album of a shady bloke and his mate despite the rather fetching Hitler collection he needed to shift to buy vodka.

We caught the train from Moscow at 9:35 on Tuesday night and got into Irkutsk at 12:40 early on Saturday morning, a barely credible 75 hours and 5,100 kilometers later. Life aboard the train was surprisingly good. Things were helped by having our compartment of four to ourselves for all but the first five hours and we whiled away the hours watching endless pine trees and silver birches drift by, counting the kilometer markers, drinking tea and coffee from the supply of boiling water in the carriage samovar and playing cards. Despite the time passing fairly painlessly we were all happy to get off today, slightly train-lagged as we have crossed 5 time zones and in desperate need of a shower.

From Irkutsk we plan to visit the worlds deepest freshwater lake at Baikal after which we'll astound one and all with some Siberia stats and facts. Bet you can't wait...
Posted by Martin at 7:36 pm
Newer Posts Older Posts Home
Subscribe to: Posts (Atom)